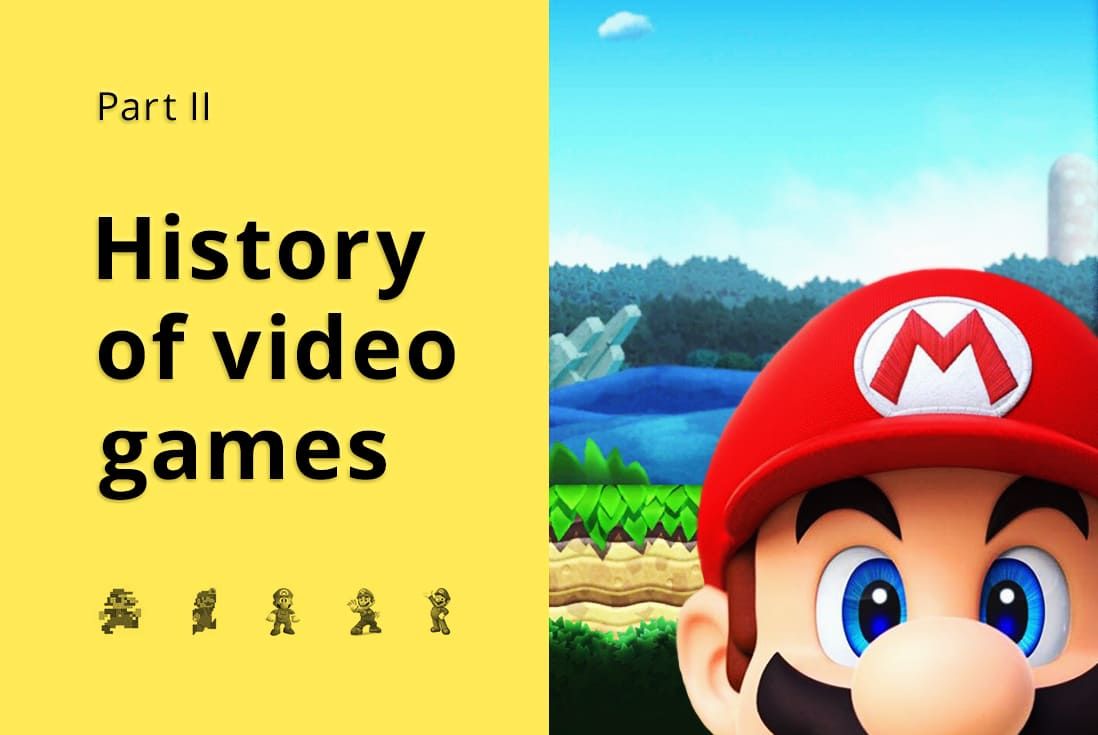 In the last article we started to tell You about the history of video games, today we will continue this fascinating topic.

Gemini the Olivers were ordinary kids from the UK that the console parents buy is not allowed, but computers are considered useful and essential in learning. Just at that time there was a number of cheap personal computers.Thousands of parents bought PCs for their children, which led to a high software industry. The 12-year-old twins Oliver had an idea and a desire to create computer games not like the classic arcade. Oliver learned to program on their computers. In 1982, when they were 13 years old, they released their game called “Roadrunner”, which was printed in a magazine so that others could type it on their computers. The magazine paid a small amount of money for this game. Having created their next game, they appeared on television and won money. Passion turned into industry. The publishers distributed the twins ' games throughout the country, but did not pay much for these games. When they were finishing school, their parents decided that it was time for them to build a real career, but the school teacher convinced the Gemini parents to wait another 1 year.

But the will of fate Oliver meet darling brothers, who also wrote games from a young age and were also unhappy with the small fees for their games. Darling decided to sell their games by mail. They reproduced games on cassettes, printed covers and eventually sold a million cassettes. In 1986, they established their own company. At their first fair they met 18-year-old twins Oliver. Oliver brought his games to the fair, showed them to the darling brothers. After watching The Oliver games, darling said that one such game costs about 10,000 pounds. The twins and the brothers began to cooperate. A month later, Oliver created the game “Super Robin Hood”. This game has brought them great profits. They continued to cooperate with the Darling company. More than 50% of all games for this company were written by Oliver's twins. Later, the game “Dyzzi” was released, which conquered the whole world. Teenagers made millions and became famous.

While British teenagers conquered the UK with their games, the East did not sleep and new stars rose there. The gaming industry began 30 years ago in the United States, soon became the center of the UK, and in the 80 - ies will be the center of Japan and this is thanks to games such as don kin Kong, Mario. All these games were created by Shigeru Miyamoto, an employee of Nintendo. Nintendo was located in Kyoto and has been producing playing cards for over 100 years. When the head of the company saw the success of video games, he decided to retrain his company and produce video games. Miyamoto was hired as an artist, he never dreamed that he would be asked to draw computer games. His fate turned the call from the United States, the company Nintendo there was a small headquarters and they urgently needed a young and creative developer, whom later became Miyamoto. He began his studies, went through the galleries of slot machines all the analyzing. Miyamoto got into the idea of making games like movies to tell different stories. Miyamoto came up with and drew not an obsessive story - the game don king Kong. The game was an incredible success and the company earned a huge amount of money. This game was the beginning of a series of games. In 1985, she released a new Nintendo game console. Miyamoto took computer games to the next level with his masterpiece Super Mario.

The magical world of games that he created was similar to the looking glass. This game and its sequels became the most favorite games. Nintendo console has become the most popular toy in the world. In 1987, the greatest game Legend of Zelds Was released. This game, which took more than 100 hours to complete, intrigued and conquered the world by defining the genre that still dominates the games. By the end of the 80's Nintendo had sold over 30 million of its consoles, 100 million games and occupied as much as 85% of the world game market and became a leading manufacturer of computer games.

In the late 80's began a friendship between the developers on both sides of the “Iron curtain”, a friendship that will later make one of them rich, and the other famous, and the game Boy the most successful game machine. The key to this friendship was Tetris. Tetris was invented in 1984 Muscovite Alexey Pajitnov to test for a new computer. The basis of Tetris was a Roman pentamino puzzle of 12 different figures. The Russian version of the ancient Roman puzzle has gained wild popularity.

In Japan, Tetris was released for the portable console Nintendo Game Boy. Nintendo became the most powerful video game company at the time. Thanks to the ability to look forward and the creativity of its pioneers in the computer game industry was an incredible growth, they realized how much humanity wants and loves to explore new worlds of computer games.